The winners of the National Finals in Malta

The Tour Music Fest’s National Final in Malta happened November 10 in Valleta. With this electrifying event, come the names of the Maltese finalists that will travel to Rome for the European Final, December 7 at Auditorium del Massimo.

On Sunday, November 10 in La Valletta, at The Thirsty Lawyer, the Maltese artists who passed the first round of selections, performed live in front of a warm audience and the Tour Music Fest’s Judging Panel made up by Francesco Tosoni (guitarist, producer, sound engineer, and music consultant), and Silvia Gollini (singer, vocal coach, performer).

Singers, Singer-Songwriters, and Junior Singers gave all they had in order to conquer a place in the European Final in Rome this coming December 7 at Auditorium del Massimo.

Here are the names of the finalists in Malta: 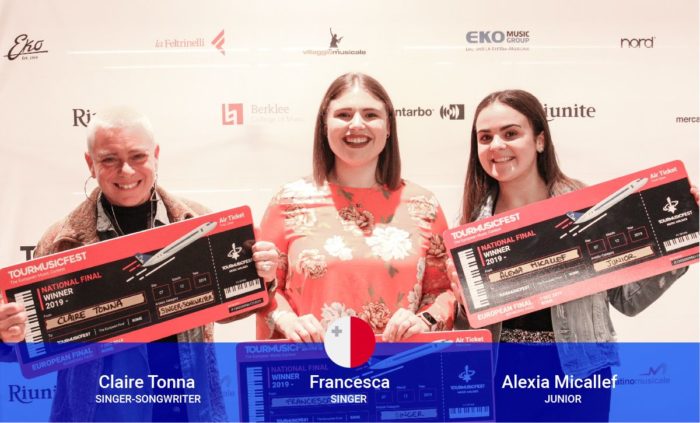 During the European Final in Rome, in front of the Official Judging Panel headed by Kara Dioguardi, the Maltese artists will challenge the winners of National Finals from The United Kingdom, Spain, Switzerland, and Italy in order to gain one of the extraordinary prizes in store: a sponsorship contract worthing €10.000,00; 3 scholarships towards music courses held by Berklee – College of Music in Boston; the production of a single with post-production at the prestigious Abbey Road Studios in London (where legendary artists like The Beatles recorded), and even €15.000,00 towards organizing an International Tour.

In Valleta we lived an unforgettable music experience which gave us the opportunity to get in touch with many extraordinary artists and performers. We would like to thank all those who worked with us for the actualization of this event, the participating artists who were with us during the event, and  The Thirsty Lawyer for hosting us with its beautiful location and warm atmosphere.

The next date with the National Finals is in Switzerland this coming November 17.